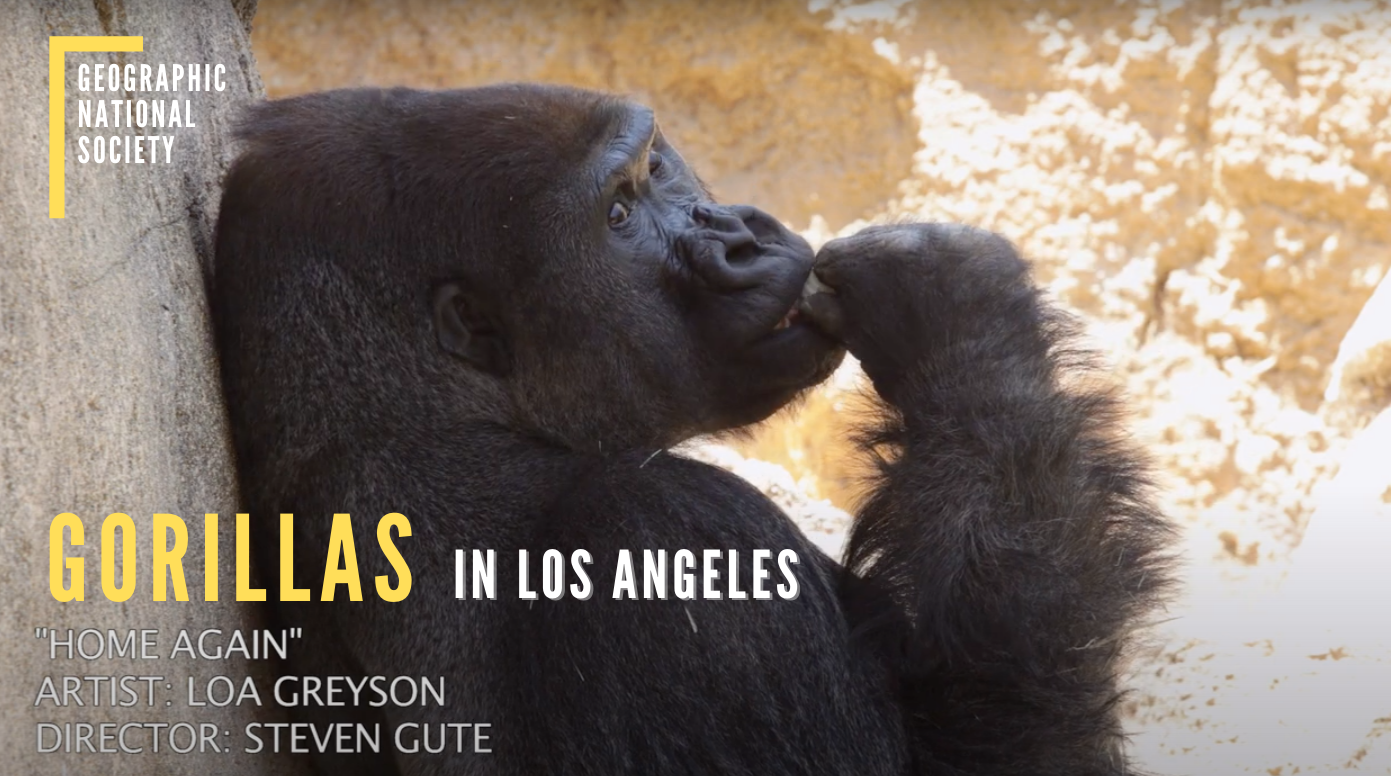 LOS ANGELES, CALIFORNIA - The Geographic National Society (GNS) has partnered with Loa Greyson and filmmaker Steven Gute to highlight the family troop of gorillas at the Los Angeles Zoo. GNS has been observing the gorilla family, living at Campo Gorilla Reserve, since the newest member, Angela, was born in 2020.

Gorillas share 98% of their DNA with humans and live in social societies just like humans. Family troops will consist of a dominant male, also known as a silverback, and multiple females and offspring. Typically, when young males mature, they will leave to start their own troop of females.

While they share similarities with humans, gorillas are a much stronger animal. Males can weigh up to 500 pounds and have a wingspan up to 8 feet wide. Silverbacks have large canine teeth that make them fearsome protectors of their troops.

Guests were thrilled to learn of baby Angela joining the gorilla family, which includes dad and silverback Kelly, mom N’dija, and aunties Evelyn and Rapunzel. However, GNS was more interested in learning more about Paul the gorilla, who didn’t seem to quite fit in.

“Paul the gorilla is actually a native to L.A. He was born in the Hollywood Hills and was recently living in Venice. He always felt out of place with all the humans so he decided to move to the zoo to try living with his own kind” Greyson explains.

After spending a couple years at the zoo, Paul mounted an elaborate escape to return to his life in L.A. He found a gate left open and took his chance when the animal keepers were at lunch.

“Escape is a strong word. The zoo has been asking Paul to leave for a while. He was just hanging around for the free food”  Gute learned from the gorilla care team. "We not only wanted to help assist Paul with his escape but also document it. Gorillas should be thriving free in the wild. It was an honor to follow Paul in his journey to freedom. Hopefully this project fosters a larger conversation about the rights of our simian relatives."

The first thing Paul did was check out the tourist attractions, which is unusual for a local. He was spotted by the TCL Chinese Theatre and strolling along the Hollywood Walk of Fame. It didn’t take long for Paul to find his way back to his home in Venice.

To learn more about Paul the gorilla, check out this video from Loa Greyson and Steven Gute. And keep an eye out for Paul at the Venice Beach drum circles. There have been multiple sightings of him there since he left the zoo.