Born into a musical family – his father is the revered Samoan folk/pop artist Jerome Grey and brother Taumata is a member of the group Common Kings - Loa Greyson, under the name Tini Grey, began his music career in Hawaii with the popular Polynesian R&B vocal group “Reign,” with whom he released one album in 2001.

In 2007, having since moved to California with wife Angela Perez Baraquio (Miss America 2001), Loa was motivated to continue his father’s legacy following the elder Grey’s stroke during a stage performance. He began anew, embarking on a solo music career that was influenced not only by his father, but also by a diverse list of R & B, Motown, Soul, Folk, Hawaiian, and Pop artists, including Ray Charles, Otis Redding, James Taylor, Israel Kamakawiwo’ole, Nat King Cole, Bob Marley, Stevie Nicks, UB40, Bill Withers, and Stevie Wonder. The result was his own blend of all of those genres, with some acoustic rock and Polynesian added to the mix.

As a songwriter, Loa’s positive attitude, his deep love for his wife and family, and his concern for many of the social issues of our time repeatedly find their way into the lyrics. His style evokes a range of reactions in the listener. One song can be playful, positive and upbeat, and the next more thoughtful and bluesy.

Loa’s rich, smooth baritone and soulful delivery evoke comparisons to a combination of John Mayer and Jack Johnson. In 2011 he released his debut solo recording Better Place, followed by Shades of Grey in 2012 and Thoughts of Christmas in 2013. In late 2014 he traveled to Nashville to work with songwriters Chris Gelbuda (Meghan Trainor) and GRAMMY® Award winner Tim Fagan, (whose hits include the Colbie Caillat/Jason Mraz duet “Lucky” and John Mayer’s “Deeper”), recording their song Waiting For Me on the Shore for release as a single in early 2015.

Loa also released a catchy Tahitian, and English remake of his song “Company” (from his Shades of Grey album) in early 2015, and together with his band, The Loa Greyson Project, he will be touring Tahiti for the first time in July 2015.

As Loa’s popularity has grown, so too, has the recognition (he was presented with the GigMasters’ “Best of 2013” and “Best of 2014” Awards) and the demand for him to perform. In 2013-2014 alone he performed at over 300 shows, and that number continues to increase. He has appeared at venues such as the venerable House of Blues, Ford Amphitheatre, and the Roxy, in addition to regular bookings at Downtown Disney and the Disneyland Hotel. He is a fixture at Hawaiian and Pacific Islander festivals, and has also performed at Mai Tai Bars in both Southern California and Hawaiʻi.

Loa has also made a number of television appearances (including Season 7 of The Voice), and has performed with or opened for acts from Justin Young to Henry Kapono, the Honolulu Symphony to Willie K, Amy Gilliom to Anuhea, American Idol finalist Carly Smithson, and many more. Of his albums and performances, critics have commented:

“…a versatile performer who is not afraid to bring his life, his truth, his vision forward in great music and then perform that music with a voice and energy that can inspire and bend any appreciative listener’s ears.” - Ted I. Benito, Pastiche Alchemy Entertainment, LLC / PAELive!

““Shades of Grey,” a collection of 12 originals, reaffirms his talent as vocalist and a singer/songwriter worthy of national play.... Whether crooning or rocking it, Grey deserves to be heard.” - John Berger, Honolulu Star Advertiser

“This is the best male vocal album of 2012 hands down.” - New Classic Music for Tomorrow

““Shades of Grey” retains his soulful island essence while exploring R&B, Pop and Folk Rock. It is diverse enough to hold your attention and cohesive enough to paint a full picture of the artist and his message, which is refreshingly positive in nature.” - Modern Visionaries 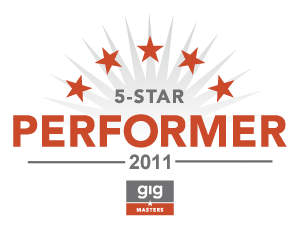